Found in a wide spectrum of beautiful colours, wonderful quartz is a classic favourite for use in jewellery. While jewellery displaying quality gems was once only within reach of the privileged rich, these days outstanding creations are now available to everyone, regardless of their budget – thanks to affordable, reputable online retailers such as The Jewellery Channel.

The following guide will explore some interesting facts about rubies.

One of the most common minerals on earth, quartz forms 12% of the earth’s crust. It is prized none the less for being highly attractive, affordable and durable. The name quartz is derived from the Slavic word meaning ‘hard’.
Quartz is formed deep in the earth’s crust where crystallization occurs between the two abundant elements of silicon and oxygen. There are two main varieties of this lovely gemstone
Microcrystalline Quartz

Transparent to translucent, Microcrystalline includes a stunning range of stones in the family, such as:

• Amethyst – famously purple as well as violet to red violet in colour and featuring at times whitish stripes of milky quartz. It is arguably the most popular member of the quartz family.

• Rock crystal – a colourless stone with fascinating inclusions of goethite, gold, pyrite, rutile or tourmaline and with a vitreous (glassy) lustre. Gem quality rock crystal is rather rare.

• Prasiolite – a refreshing leek-green in colour, which is produced by heat treatment of amethyst or yellow quartz (it is not found naturally).

• Hawk’s Eye – blue grey to blue green in colour; it is named after the gleam of light reminiscent of a bird’s eye.

• Cat’s Eye – comes in a white, grey, green, yellow or brown; it has an enchantingly glimmer caused by reflections of light from parallel inner fibres, making it resemble a cat’s eye.

• Tigers Eye – prized for its silky sheen, it has a gorgeous gold-yellow to gold-brown colour caused by oxidised iron inclusions.

• Smoky quartz – a lovely brown to black to smoky grey in colour.

• Rose quartz – ranging from a strong pink to a paler pink, its inner structure causes the appearance of a six rayed star effect when cut as a cabochon (dome shape). Many specimens are slightly cloudy, which deepens the colour, while transparent are highly rare.

• Citrine – a light to dark yellow or golden brown in colour. Sometimes these gems are actually heat treated amethyst, giving them a lovely reddish tint. Natural citrines are mostly a pale yellow colour.

• Ametrine ¬– yellow to violet in colour, since they consist of a mixture of amethyst and citrine.

This family branch of quartz has microscopically small crystals and ranges from opaque to translucent. It is also known as chalcedony (the species name for cryptocrystalline quartz). These gems range in colour depending on the trace elements present in them during crystallisation. Some of the most popular varieties include agate, chrysophase, bloodstone, jasper and carnelian.

Quartz is the only mineral found in extremely large quantities worldwide and mined naturally. Key locations of deposits include Brazil, the US, Russia and Africa. Meanwhile, quality amethysts are also mined in Mexico and Canada, while Smoky quartz is found in the Swiss Alps and Scotland. Colourless quartz, the rock crystal variety, is found in the UK, Switzerland and Madagascar.

• Quartz is a fairly durable stone, measuring around 6.5 on the Mohs Scale of H – this makes a good stone for use in rings and bracelets which suffer a lot of wear and tear.

• While generally always relatively affordable, quartz is valued according to its clarity, carat weight and colour.

• Generally, the better a gem’s clarity factor (meaning few inherent inclusions seen by the naked eye), the higher the price it will fetch.

• Since quartz is abundant, there is no reason to settle for specimens with visible inclusions, except those that define the character of the stone such as Cat’s eye, Hawk’s Eye or Tigers Eye.

• Quartz is mined naturally and is not usually artificially enhanced, except in some cases by heat treatment to improve the gem’s colour intensity.

• These lovely gemstones are best displayed in sunlight, as artificial light does not bring out their full beauty.

Different quartz varieties are ascribed to various zodiacs. For example, amethyst is the birthstone for February while citrine is the birthstone of November.
Overall, the healing power of quartz gemstones have been used through 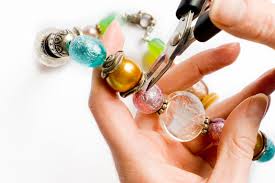 the ages by healers, shamans and medicine men to aid in large variety of ills, such as headaches, eye infections, sore throats, heart ailments, sciatica and varicose veins, to name but a few.

This famously beautiful gem family offers buyers infinite choices spanning a rainbow of colours and appearances. Thanks to online retailers such as The Jewellery Channel , everyone can now own quality quartz adornments regardless of their budget.

Author Bio: Julia Littlewood : Jewellery Designer. She is passionate about ornaments, gems and stones. If you want to explore the most vibrant and widest range of jewellery pieces , she suggests you to visit The Jewellery Channel. Julia loves joining parties, fashion shows, exhibitions apart from designing costume jewelleries and writing articles for her followers.
To know more about Julia and make her a friend add her to your G+ circle.